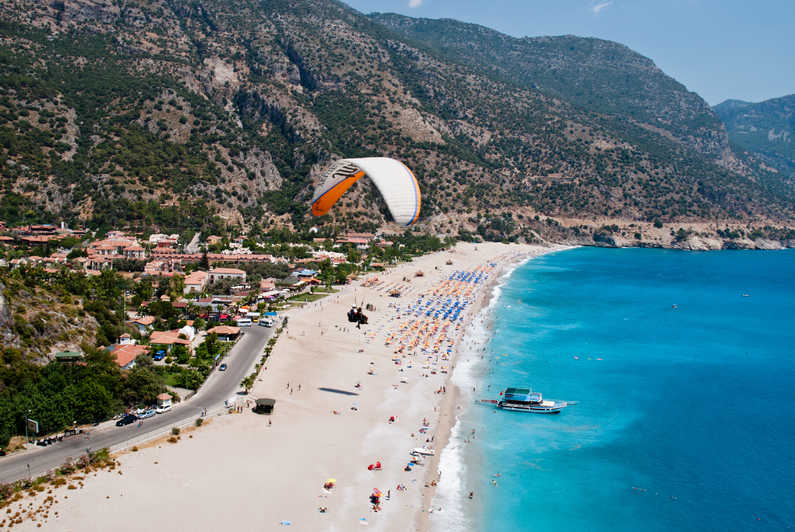 Flying High! Paragliding over the Oludeniz Beach in Turkey

Are you an adrenaline junkie like me? Do you like extreme sports? Have you ever wanted to throw yourself off a mountain. Well, there’s no better place for that! Olüdeniz is Turkey’s top destinations for tandem paragliding. They do it all year around!

The stunning little town Ölüdeniz is located on the Mediterranean coast of Southern Turkey, 15 kilometers (9.3 miles) from Fethiye. This destination is a dream come true for tourists. It has become well known as the home to the famous Blue Lagoon, UNESCO world heritage and the signature coastal image for Turkey. 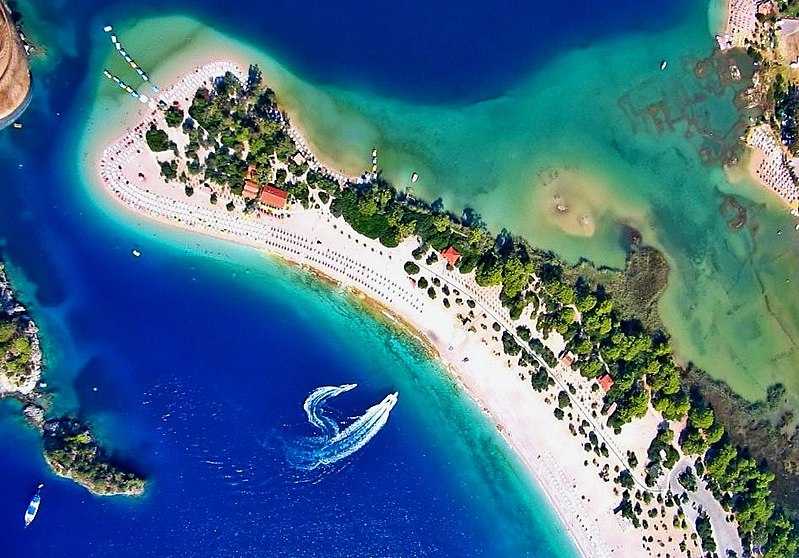 The ride up to Mount Babadag

The ride up to Mount Babadag for the flight setup and take-off was actually scarier than the paragliding experience! It was nothing less then nerve-wrecking for me. The road was so narrow and there weren’t any guard rails! The curves in the road go left and right every 10 seconds or so. The driver steered the wheel like it was a walk through a park. Maybe they were trying to scare us before we actually took flight?

Upon our arrival, the spot was packed with paragliders from all over the world. It was awesome to see there were people of all ages and even children!

In that moment, I found out that it had been one of the highest commercial take-off sites in the world to paraglide from!   Cool, isn’t it?

The setup and take-off was smooth with almost no instructions.

I picked up just fine with their directive gestures. It was actually easier than I thought. I was strapped to my pilot and he just started running while I picked up on the pace. We didn’t have to run to the end of the cliff. We were lifted gently up into the sky. 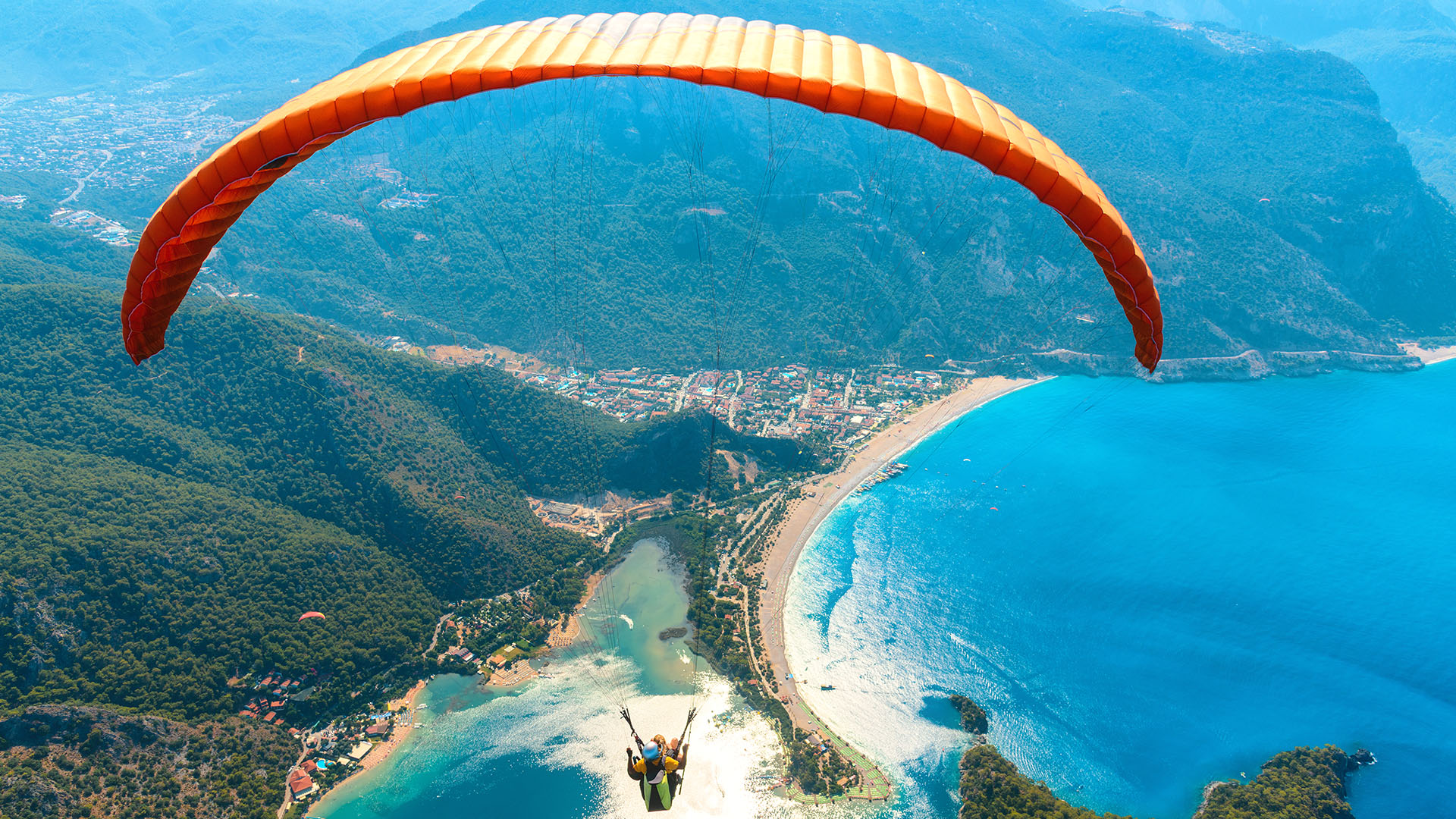 From that point on it was like an out-of-body experience. I just couldn’t believe it, and I’d be lying if I didn’t tell you that I got totally emotional when I was up in the air. It was like getting my adrenaline all pumped for the first time.

Speaking of first time, the feeling I had was exactly like having my stomach being up in my throat when I rode roller coaster for the very first time while paragliding. That surely brought back many good memories I had back then.

I could see many things from the bird’s eye.

It was unbelievable and surreal when I could get an panoramic view of the mountains and the sea with yachts and boats roaming around like a baby snake with their trail of propelled waters. I even could get a good look at the hotels and other buildings in the area. You’ll be able to see many things you don’t get to see on the plane as the clouds would fog up the view of the land from the window of your seat in the airplane.

This experience will make you feel like you’re above all just because you’re between the land and the sky.

Looking at the blue lagoon below us and having the sun above, shining on us was truly out of this world. I was so fascinated that I almost forgot to take pictures.

Gliding through the clear blue skies, the view over the Ölüdeniz beach, the mountains and the national park was simply breathtaking. The scenery was amazing, and my pilot took time to point out different areas that I could see. He even made turns and spins for me when I asked him to for me to see certain view of the entire scenery I had been seeing. 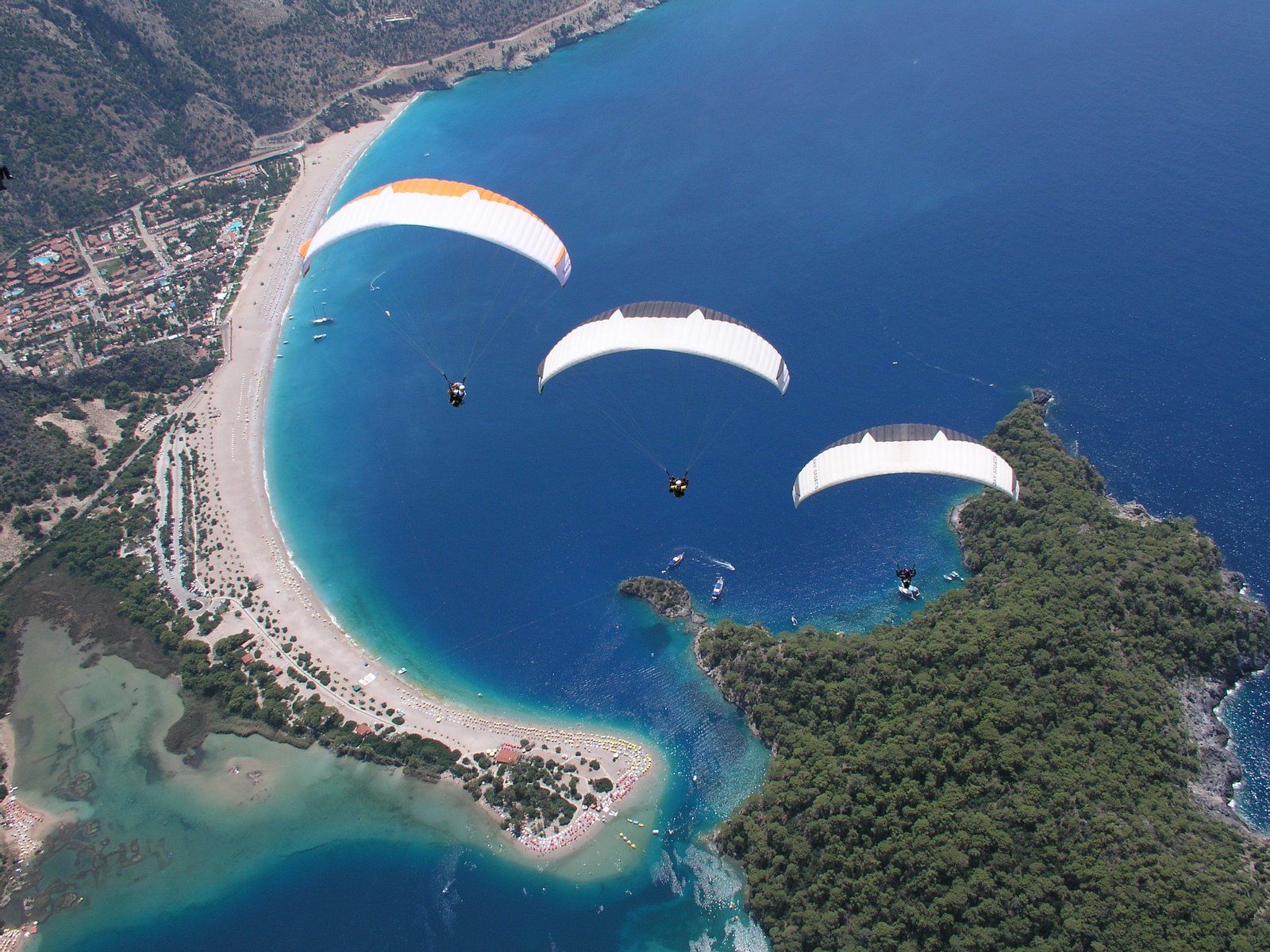 During the journey, the pilot did a few loops and spins, and it surely got my adrenaline pumping! He pulled out some good tricks out of his sleeve with his nearly full 360-degree flip, but it was actually a swing of flip that turned into a twisting spin, which totally got my entire organs inside me all flipped around.

A stand up landing

As we were approaching the land, the pilot had us hovering about a meter from the landing area. There was a group of people sitting on the grass while the pilot hovered the parachute and he just glided right through them. It was like one of those movies when a crowd of people would run to clear out at a very close call before something hits them. He teased the crowd by nearly taking one of his co-workers’ hat.

In that moment, I was told to stand up and start walking. I was a little paranoid that moment because I didn’t want to fall over, but it was actually easier than I thought when I landed.

For me, the flight from the top to the bottom took approximately 45 minutes. Of course, I would go all out. It’s all out or nothing for me. I wanted to get the best of this trip!

I couldn’t have ended this day any better without a cheer over beer with my pilot.

To sum it up: I loved it. Better than skydiving! I had done it before and I would take paragliding over skydiving, hands down. It was so much fun, a must do adventure in Ölüdeniz! It’s a lifetime experience!

There is no way that I wouldn’t recommend  Paragliding! They’re excellent, especially with me as a Deaf person. All their pilots are professional and have at least 8 years of experience. Well, I’d like to emphasize how professional and good they are with paragliding by mentioning that my pilot was wearing flip-flops the entire time. Yes, ran and took off with flipflops, then landed with then. I didn’t even once felt worried, unconfident nor unsafe. He flew and landed wearing flipflops like a pro, I’m telling you.

If you end up booking any deal from our alets, we would love to know! If you are a fantastic writer or have recently traveled somewhere amazing and want to share with us your tales, please write to hello@voyazor.com for more info about being published on Voyazor.com

Livestream the Northern Lights from home

Top Reasons Why You Must Visit Bosnia &...

10 travel movies for a virtual journey while...

The perfect itinerary for 3 days in Tromsø

What you need to know before travelling to...

8 incredible places you must see if you...

7 things to do for an intense experience...

Top 5 must-have experiences in The Bahamas